Jeremy Banner, formerly Jeremy Hale, was the younger brother of Bruce Banner.  Unbeknownst to the two, their father experimented on himself and passed down to them the same genetic enhancement that would act as the catalyst that would soon come.  A student at Horizon University, he began to work in Gamma Sciences, learning various ways to use it to heal people.  An accident however, causes him to mutate into the 2nd Hulk, now known as Goliath.  Looking for his brother now, he leaves with his College sweetheart, Jaqueline Jekyll, and later on becomes a leader among the Gamma Clan known as Smash Agents. 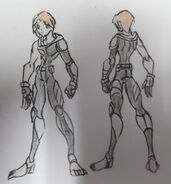 SMASH Attire
Add a photo to this gallery

Retrieved from "https://jluspiderverse.fandom.com/wiki/Jeremy_Banner?oldid=4182"
Community content is available under CC-BY-SA unless otherwise noted.