Start a Wiki
Gwen Stacy is the daughter of Captain Stacy, and a dear friend of Peter Parker.  Bitten by the same spider as Peter, the effects didnt take until a year later until College at Horizon University.  Fully awakened as a Were-Spider, she becomes the Spider-Punk of the Web-Warriors... as well as a love interest for Peter due to her crush on him since the 4th Grade.

Gwen Stacy is the only daughter of Police Captain George Stacy, his divorced wife, Helen, and the niece of Dr. Raymond Warren. She always looked up to her father greatly. Gwen's life was not easy by the slightest as she suffered from various parental problems when her mother abandoned her and her father, Police Captain George Stacy. But then, she found solace in the 4th Grade when she met Peter Parker, and immediately became friends, though it became a crush to her when she turned eleven, and continued to grow up with Peter going to High School, and later met and befriended Henry Lee, becoming the Three Nerd-Keteers as they joked on that. Though it became a bit of a worry when Harry Osborn later joined in. Though because of his father, Norman Osborn, she felt a bit uneasy around both father and son, as if she knew there was more than just a terrible father/son relationship.

Though it got even more uncomfortable when Peter's old childhood friend, Mary Jane Watson, had moved back into town to join them on their last years of high school. The chance of her confessing to Peter before high school ended was nowhere near to work out with someone as pretty as MJ. And the field trip to Oscorp didn't make matters easier either, as Peter was bitten by an escaped genetically enhanced super spider, and almost feared for him, as Henry rushed to call an ambulance.

Although after Peter was discharged with a clean bill of health, it was uncertain on what would happen next, as Gwen didn't get what happened afterwards. Peter's health had steadily grown better, no longer wearing glasses and acting more cocky like Flash Thompson, she barely knew who her friend was anymore. And it made it even weirder when Henry knew something but wouldn't tell her anything, even when she asked in order to help them out. Though things got better between all four of them... but it only happened when Peter's Uncle Ben had been shot from a mugging in their own home. At the graduation, all three chipped in together to live in a studio apartment, with Peter and Henry living next door to each other in studio apartments, as well as her due to the grant they had been given due to their enrollment in Horizon University.

And then he appeared in her life: Spider-Man. The Daily Bugle called him a monster, but she knew otherwise when she was saved by him from what would later be known as the Scorpion. She had managed to help him in stopping the Scorpion from causing the meltdown in New York. She admired his bravery, though could tell he was somewhat awkward around girls. Though another turn for the worse happens when her father is nearly fatally wounded but put into a coma of which no one knew when he would awake. This caused a bit of tension when her friends, Peter and Henry, wouldn't be there for her since their duties as Spider-Man and Jumper as well as their jobs at Horizon and the Daily Bugle caused time to get strained with their social lives.

Unbeknownst to her, her uncle, Raymond, had become the Jackal, a genetic menace bent on mutating all of New York, and was one of the minds behind the Genetic Super Spiders. Seeing her blight, he offered to help her in helping her father, though it required her to help him out with an experiment or two... in which she was exposed to a Ghost Super Spider and bitten. Freaking out, she ran away, not knowing what was happening to her, as before his Mutates could track her, she had transformed rather quickly into a Ghost Were-Spider.

Confused and afraid, she narrowly escaped the Mutates, using her new wall crawling abilities and newfound strength, speed, and agility, but she discovered her most amazing ability to camouflage and nearly turning invisible before anyone's eyes. The Mutates managed to almost spot her due to smell, but suddenly, Spider-Man and Jumper appeared, beating the crap out of the mutates, giving Gwen the chance to go visible again and run, but not before Spider-Man ran after her and catching up. Catching her before she tripped and fell, it was discovered that he realized she was Gwen Stacy, but by accident, she webbed his face, as she jumped out of there, confused and worried on that Spider-Man knew who she was now.

The next morning, Gwen awoke in her bathtub, back to human again, but now seeing she had changed physically, no longer a scrawny nerdy college girl, but a Beauty Queen with brains. Though her stunning discovery was put on hold for something even bigger, as Peter had come over, and immediately called her out as a Were-Spider. Worrying, she quickly denied this, but was stunned and eased into it, when Peter crawled up her walls and on her ceiling, revealing that he was Spider-Man, and like her a Were-Spider. After revealing what had happened, she felt that their friendship had been fixed again, now that she had joined in this crazy new world.

With her newfound powers, and being alongside her friends, she went by Ghost Spider, a member of the Web Warriors, as well as one of Peter's love interests.

Gwen was smart, but, a little nerdy. She definitely wasn't unattractive, but, compared to other girls such as Mary Jane, Sally, Felicia, Anya, or Liz, she was often overlooked by boys, with the notable exception of Peter, Henry, and Harry. She was a hard worker, especially while being an intern at Curt Conners' lab. She was the intellectual counterpart of Peter, rivaling his already vast intelligence.

Gwen is a more strong willed, and kind person, harboring deep feelings for her best friend Peter. Gwen appears smart and a bit sassy. She is also very intelligent. Enough to know how to defeat the Jackal and come up with an anti-mutagen to cure her classmate, Aleksei. Gwen also tends to get upset about things like her uncle being the Jackal. 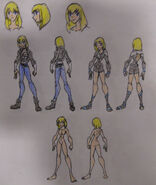 Were-Spider
Add a photo to this gallery

Retrieved from "https://jluspiderverse.fandom.com/wiki/Gwen_Stacy?oldid=4189"
Community content is available under CC-BY-SA unless otherwise noted.